The first time I saw the Alice in Wonderland Disney Movie, God spoke to me.

I was about five years old at the time, and the movie was the old, original Disney version from 1951. It was shown at an old movie theater in my hometown, where I went to see it with a small group of people, my mother, my sister and some friends.

This wasn't the first time that I'd heard Him speak, either.

He'd done that throughout my childhood, off and on. It used to happen in different ways, through dreams, life situations and by me just sometimes sensing Him there. Often there were thoughts communicated to me at the same time. These thoughts came especially when I watched a certain movie or listened to a fairytale. It was as if the narratives would suddenly start speaking to me, connecting me to some hidden part of myself.  It was as if they contained secret messages that were especially designed for me. As if God wanted to communicate through them something important about the world and myself.

Usually the voice helped me. It brought me peace, and restored a sense of safety and clarity in an otherwise chaotic existence. But at times it also scared me, like it did on the day when God spoke to me after the Alice in Wonderland movie. I was so alone with the experience, and couldn't mention about it to anyone. There was no room for my truth in the reality that I was living in.

I was very lonely at the time. A bit of an outsider. Extreme in many ways, strong and powerful in certain areas, but extremely vulnerable in others, hyper sensitive, someone who felt everything. And the things that I felt, I couldn't express, because in my home
I didn't have a voice. So I had to carry these things inside of me.

Most of my secrets had to do with problems in my family dynamics and my own identity. There were issues in the emotional climate of my home. On the outside things looked fine, we seemed like a normal family. But the toxicity was underneath the surface: Emotional abuse, pretending, twisted relationships...issues that were completely shoved under the rug and left unspoken.

And I was the invisible child, the one no one saw or heard.

But on that day at the movies, right after it was over and the lights were slowly turning on, that's when God spoke to me. I was following the crowds towards the exit, and right in the middle of the aisle I felt a communication reach me. It was pure knowledge that came from deep within me. I don't know how how I knew, but it was clear as day, and there was no question about it. I knew that the voice belonged to God, and that He was talking to me.

There were no words, just an idea, and a very strange one at that: He told me that I was Alice in Wonderland.

It didn't make any sense at all. It was absolutely the craziest, most cookoo thing I'd ever heard. But somehow I also knew that it was true. More true than anything else. More true than the movie theatre around me, and all the people in the room, and even more real than -- me.

If that makes sense.

I felt a calmness come over me. And then, a quiet assurance that told me that I was being watched over, and nothing bad could happen to me.

I walked out from the movie theater with a hum in my ears. And as I walked next to my mother, the presence kept hovering over me, repeating over and over, that I was, indeed, Alice in Wonderland. And I felt so shy about it. I wanted to go and hide somewhere in the bushes, because I was afraid someone might notice and say, "Hey look, there's Alice in Wonderland walking down the street!"

It wasn't until years later, as an adult that I've come to understand what exactly God meant that day.

And it's taken me years to learn how to deal with the hurt child that still lives inside of me. But I think that I'm starting to understand now.

No one listened to the child back then, but maybe things could be different now, maybe someone could listen now. 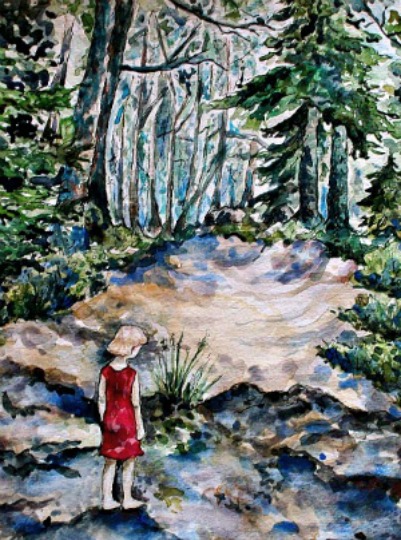 What are your thoughts about what you just read? Leave me a comment in the box below.
Follow @@Seekingwonderla